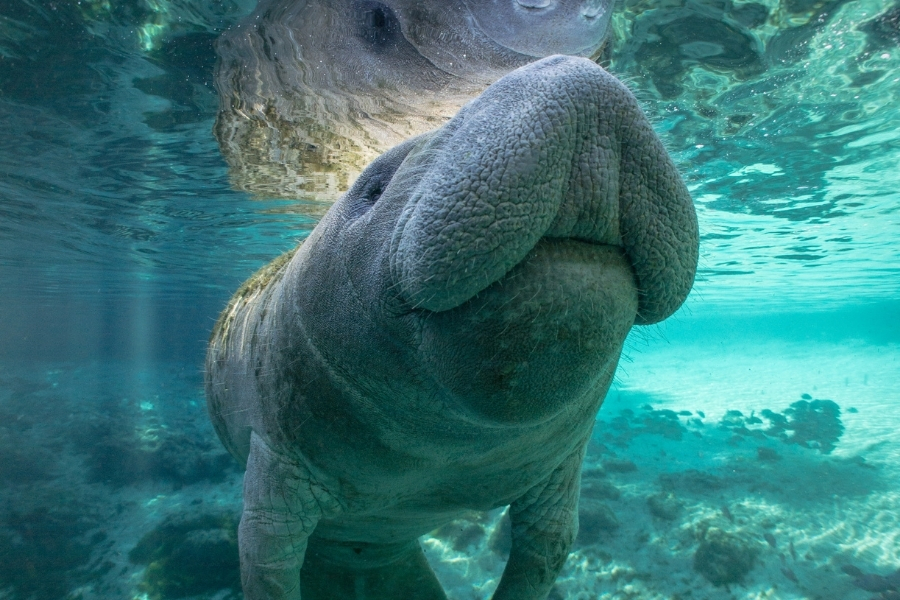 Especially in the winter, you can see them in coastal waters, canals and rivers – Florida’s iconic manatees or sea cows. Together with alligators and dolphins, they are the animal stars of the Sunshine State. And you cannot only watch them from the shores or on a boat ride. Swimming with manatees is one of the most popular activities for visitors in Florida. In this article, you will learn more about these fascinating animals.

Manatees in a Nutshell

Despite their imposing size of up to 13 feet and a weight of 992 lbs, manatees are gentle creatures that feed exclusively on plants – hence their old name “sea cows”. The grazers populate Florida’s coastal waters. In winter, however, they are also found up-stream around warm springs. There, they break their solitary habits to gather around in groups.

Manatee mating season runs from spring to summer. Then, multiple bulls fight over one female, chasing her through the water. Manatee babies are born after 12 to 14 months. Although twins occur, mothers usually raise a single calf that they feed for up to two years.

Manatees – a threatened Species in Florida

Today, it is illegal to hunt or injure manatees in Florida. However, the animals are still threatened by collisions with boat propellers and floodgates. Waste water in the oceans is another huge problem for manatees.

Due to these threats, the manatee population in Florida only ranges around an estimated 6.000 individuals. Luckily, the state has imposed strict conservation measures. Injuring or disturbing manatees is punishable by law. In addition, protective zones have been created in coastal waters. These measures have already born fruit: In the last 30 years, the number of manatees has nearly quadrupled.

The best Places to see Manatees in Florida

No matter which part of the Sunshine State you want to visit – manatees are never far away, and there are many ways to observe them:

Guests in Cape Coral can take a trip to Serenia Vista Park, where guided boat tours to manatee spots are offered. Or how about the Manatee Park 7.5 miles north of Fort Myers? There, the animals like to relax in the warm water of a power plant. The same phenomenon can be observed further to the north at Tampa’s Apollo Beach power plant.

Florida’s coolest city is a true haven for manatee fans, who can choose from five different spots. If you want to observe the animals from an elevated platform, we recommend the Manatee Lagoon or the Manatee Observation, and Education Center. Alternatively, you can take a boat tour to see large gatherings of manatees in the water. Three Sisters Springs and King’s Bay are ideal places. If you want to learn more about this threatened species, you should visit the Black Point Park & Marina in Homestead: Here, conservationists nurse injured manatees back to life and study their behavior.

There is hardly any place in Florida with a bigger biodiversity than Everglades National Park – perfect if you want to study manatees in their natural habitat. Many visitors take an airboat tour that brings them to the best manatee spots. Among the local companies, “Captain Jack’s Airboat Tours” in Everglades City has a particularly good reputation. However, before you go, you should try your luck at the city’s marinas and canals: There, the curious animals sometimes stick their snouts out of the water.

If you are traveling north of Tampa or Orlando, you should head for the warm springs near the coast. For example, you could take a kayak tour in Weeki Wachee Springs State Park, where manatees are frequently spotted. The trip is particularly worthwhile during winter. At Blue Springs State Park, you can see injured manatees being nursed back to life. In addition, this park is an ideal spot to see manatees in groups. More sea cows live in Homosassa Springs Wildlife State Park, which has both permanent and seasonal manatee residents.

Still further to the north, near Tallahassee, stretches Wakulla Springs State Park – home to the earth’s largest and deepest freshwater springs. Not only do female manatees often come here to give birth. At Wakulla Springs, you can also see groups of sea cows all year round – preferably from the park’s watch tower.

Florida’s southern islands are not only popular with human visitors. Manatees also love the Keys’ tropical warm waters. On Key Largo, you can book boat tours to the Everglades, but also sight the animals in Manatee Bay and in the marina of the Hampton Inn Hotel. More manatee spots include Little Palm Island, Vaca Key and Marco Island. Guests in Key West can book a kayak trip with the company “Kayak Kings”: Manatees are only one attraction on the paddling tour through untouched mangrove forests.

Swimming with Manatees – a Dream come true in Florida

Watching manatees on land is already a spectacle – but just wait until you see Florida’s iconic sea cows in the water. You can fulfill your dream of manatee swimming in King’s Bay, roughly 78 miles north of Tampa. The aptly named Crystal River is amazingly transparent, so manatees can be clearly seen underwater.

One of the many companies will take you to a manatee spot, where you can dive into the water with your mask and snorkel. The animals are very curious, so do not be surprised if a manatee comes close or even touches you with its snout. They are no threat for humans. Of course, with 300.000 visitors a year, some rules must be followed: Feeding the animals is forbidden. You also should remain passive in the water, so the manatees are not startled.

If you want to swim with manatees, expect to pay 65 to 100 USD per person – depending on the length of the trip and how many people are on it. As a rule of thumb, try to get an early morning tour. At that time, manatees are particularly active.

Open chat
1
Questions? Don't hesitate to contact us.
Powered by
Hi, how can we help you?